Home
Featured
Tech News
The British are Crazily asking Google ‘What is the EU?’ after voting to leave the EU
Watch my Ebook
Start Earning Today as a Developer!

That confusion over what Brexit might mean for the Britain economy showing a reflection across the people of United Kingdom on Thursday. Google reported that Not Only the Search happened on Ballot but also about basic questions that is related to vote. After eight hours the polls closed, Google reported that searches for “what happens if we leave the EU” had more than tripled. According to google trend something that appear was like this However, in an extremely reassuring sign that everybody knew what they were doing when they voted, Google trends something totally different that people who voted in favor of getting Britain out of EU dont know what would goona be impact on britian or what Brexit actually means this what that Twitter showed 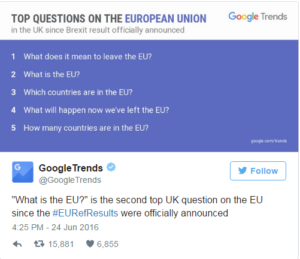 now after the people google trend shows searches “What is Brexit?” and “What will happen if we leave the EU?”
Now people are regrating what they did see the video

“Acquiring of knowledge is obligatory to every Muslim male and female.”
The Prophet Muhammad (P. B. U. H.).